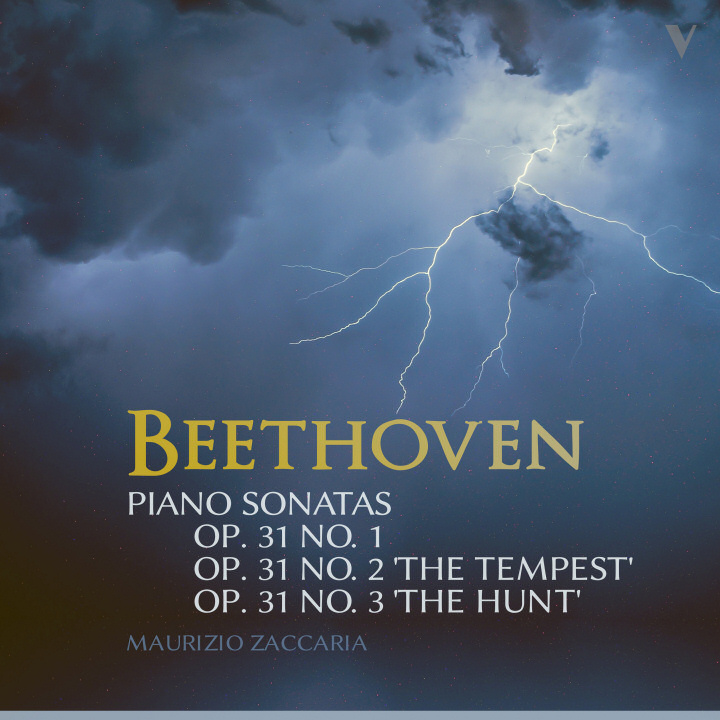 As the nineteenth century began, Beethoven produced vast amounts of music, much of it involving the piano. A string of piano sonatas, all highly original compositions, were published between 1801 and 1803. The Three Sonatas, Op. 31, the culmination of this artistic outpouring, were part of an effort to bring new life to a form considered somewhat tired and old-fashioned. The first of the three Sonatas, in G Major, was the last to be completed. The opening movement, Allegro vivace, features an array of technical challenges (parallel scales and arpeggi) displayed in full force in the first theme and its different incarnations throughout the movement. However, the tendency is that of desynchronizing the hands in stuttering gestures, perhaps wittingly depicting a piano lesson in which the studentâs inability to play evenly is met with irate retorts from the teacher. The second theme, dancelike, is in the key of B major/B minor â an unusual choice, which mirrors the tonal scheme found in first movements of earlier sonatas. The Adagio grazioso that follows is a delightful serenade, clearly modeled after operatic archetypes, with richly ornate cadenzas and arabesques. The closing movement, Allegretto, is a rondo defined by lyrical elegance. The material is characterized by frequent dialogues between the soprano and tenor registers, mode shifts, and cross rhythms. After a series of interruptions, marked by tempo changes, the sonata closes in a frantic Presto. The second sonata of the set, in the key of D minor, bears an apocryphal nickname â âDer Sturm,â the tempest. According to Anton Schindler, the composerâs self-appointed secretary, Beethoven responded âgo read The Tempestâ when asked what he had in mind when he wrote this sonata. Beethoven was perhaps alluding to Shakespeare theatrical work, but the reference could have been the mystical writings of Christoph Christian Sturm, which Beethoven was avidly reading at the time. The opening movement begins in a rather unusual fashion, alternating two measures marked âLargoâ and a longer âAllegroâ section. The first theme is then introduced in the home key, and features an edgy dialogue between an imperious call in the bass register and a pleading answer in the treble. The second theme, breathless in character, is in the key of A minor, thereby unusually presenting two themes in minor keys. The material from the brief Adagio section in the opening is used to join exposition and development, and is also re-proposed when two long recitativo sections, accompanied by long pedal markings, appear before the recapitulation. The second movement, Adagio, solemn and dignified, is in modified sonata form. It features operatic ideas in the main melody, alongside striking orchestral effects such as timpani tremolos in the bass register. The closing movement, Allegretto, is in rondo-sonata form. The wistful, flowing melody is interrupted only by the short bursting trills of the second theme. As the end nears, two dramatic vocal gestures interrupt the stream of sixteenth-notes, and the movement closes mysteriously by sinking into the abyss.in an arpeggiated gesture.
The third sonata, in E-flat major, the longest of the three, presents uncommon traits, not least the fact that it lacks a real slow movement. It has been nicknamed âThe Hunt,â because of its frequent allusions to horn calls throughout the work. The first movement, Allegro, opens with two whimsical questions, to which a more serious answer follows. The character is overall comical, with a lighthearted second theme that hints at vocal aspirations. Just as in the other two sonatas, Beethoven introduces the idea of frequent tempo changes, this time defined by what would become a new notational tool â the marking âritardando â a tempo.â Frequent metric displacements heighten the playfulness of the movement. The second movement, marked Allegretto vivace, is a Scherzo, but in the unusual time signature of 2/4. Full of comical surprises, the writing is reminiscent of wind instruments, especially in the chortling of bassoons in the bass register. The third movement, marked Menuetto â Moderato e grazioso, is tender and gentle,and stands as the official slow movement of the sonata. The last movement, Presto con fuoco, is a rondo full of raw energy and drive. A tarantelle in perpetuai motion, it aptly closes the sonata in an optimistic and jovial tone, and is also testimony of Beethovenâs pianistic resources and virtuosity.
Maurizio Zaccaria continues his journey in the world of Beethoven's complete piano sonatas. His playing is characterized by unique readings and virtuosic flair, all perfectly in line with the sound and timbric resources of modern instruments.
The recording has been captured by sound engineer Alessandro Simonetto with 5 microphones - a pair of BruÂ¨el & KjÃ¦r 4003, and three spots Neumann KM 140. The instrument used is a brand new Steinway grand D-274.