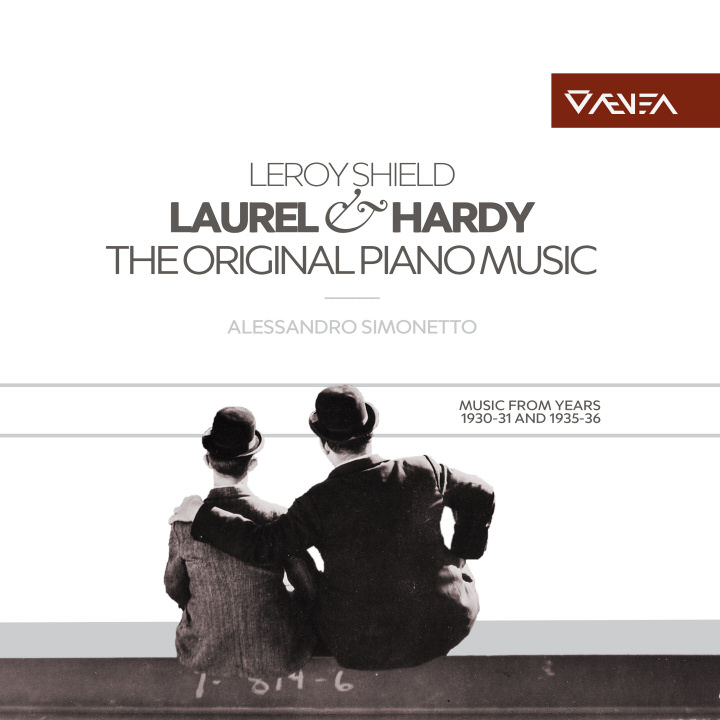 This album recreates the atmosphere and feeling of the 1930s comedies from the Hal Roach Studios, the âLot of Funâ where Laurel & Hardy, Our Gang, Charley Chase, The Boy Friends and Thelma Todd created their biggest successes. These short films were usually enlivened by the catchy background tunes composed by LeRoy Shield (1893-1962). Although the titles of these tunes remained known only to insiders, the music is all too familiar to anyone who ever saw Stan and Ollie embark on one of their doomed journeys. Trained as a classical pianist, Shield eased into the new medium of film music with apparent ease and knocked off dozens of short, catchy background tunes in record time. It is not funny âcomedy musicâ in itself; rather, it ranges from slow, sentimental ballads to uptempo dance numbers.
Tracking down original sheet music took years of detective work. For the first time in history, this album contains renditions of original piano music and original piano transcriptions made by Shield himself â written before the orchestral versions were recorded â of tunes such as âAll Togetherâ, âLittle Dancing Girlâ, âGangway Charlieâ, âRiding Alongâ, and âThe Moon and Youâ. It also contains piano transcriptions of Shieldâs background tunes from 1930-31 as originally published as loose-leaf sheet music: âBellsâ, âYou Are The One I Loveâ, âIn My Canoeâ, âOn to the Showâ, âRiding Alongâ and âGood Old Daysâ.
Main focus of this album is the reconstruction of the score of the film âLaughing Gravyâ from the recently discovered manuscripts!
End, also for the very first time, this collection includes original piano scores of Shields' Stock Music used in various films, around 1935-36, and some excerpts from the âOur Relationsâ music score, including âWere Just Happy Familyâ, âOn a Sunny Afternoonâ and âJust a Kissâ.
By the way: this is the - only - digital version of the CD released in December 2016 [AE16024 AEVEA | Leroy Shield. Laurel & Hardy: The Original Piano Music], now difficult be be found.

Pianist Alessandro Simonetto, praised by the composer of Charles Spencer Chaplin, Eric James, as an immense talente, has just recorded "Early and Esoteric Works", a 3 CD-set containing all the piano music by Erik Satie written before and during his mystic period (1887-1897).
The recordings of "Laurel & Hardy: The Original Piano Music" has been made originally @ 176.4kHz * 24-bits using Sennheiser & Neumann mics, pres/AD by Prism Sound, in real stereo tecnique with any mastering addition!