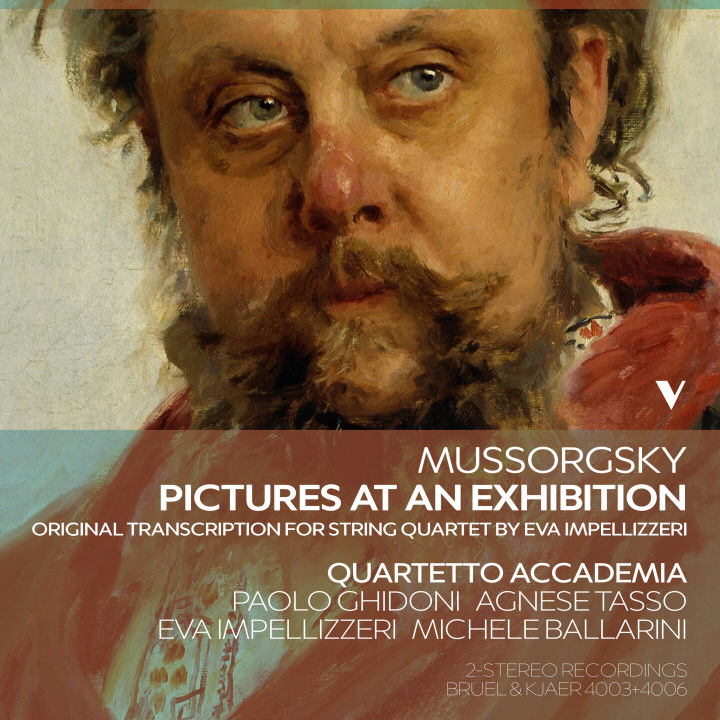 When the Russian designer and architect Viktor Hartmann died unexpectedly of an aneurysm in 1873, Mussorgsky fell into a state of profound depression. The two artists had grown close. A memorial exhibition was quickly planned, and over four hundred of Hartmann's works were displayed. Some of the paintings and sketches exhibited were the source of inspiration for Mussorgsky as he set out to compose Pictures at an Exhibition, a suite of brief movements penned in June 1874 - three months after the exposition took place. Seemingly depicting the viewer wandering through the gallery, moving from one painting to the next, the piece has become one of the giants of the piano repertoire, and has been orchestrated by a number of composers, including the splendid version by Maurice Ravel.
In the present album, the Quartetto Accademia offers an unusual version of Mussorgsky's most famous work - in a transcription for string quartet, completed by Eva Impellizzeri. It is a remarkable listening experience, both for its harmonic completeness and timbric research.
The Quartetto Accademia is formed by violinists Paolo Ghidoni (Beethoven: Complete Violin Sonatas; Ysaye: Complete Sonatas; J.S. Bach: Sonatas & Partitas) and Agnese Tasso, violist Eva Impellizzeri (who is the author of the transcription featured by the present recording), and cellist Michele Ballarini.
The recording was captured by two pairs of historical microphones Bruel & Kjaer (4003 + 4006), which produced two stereo recordings at the same time. Both audio versions are offered here, for the gratification of audiophiles.